The last time we heard from Chris Brown was when he begged his remaining fans to help him resuscitate his failed career by calling into the radio stations to get them to play his records.

When that failed, he created another Twitter page (after deleting his first page) and begged his fans to follow him again. Chris Brown is so deep in denial that when his fans didn’t rush to follow him en masse on Twitter, he promised to go live on Ustream if they would just help him get to 100,000 followers (which they dutifully did, but only because they pitied him).

With all that begging and pleading going on, you had to figure that Chris Brown’s peers/competition were waiting in the wings to throw rocks at him. Rapper Souljaboy Tellem took the first pitch tweeting this nonsense about Bow Wow and CB’s followers not equaling his 2 million plus followers. 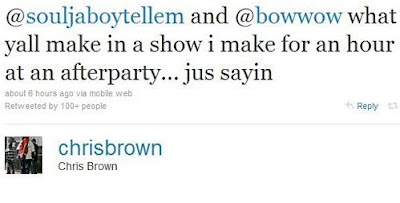 Wed Mar 24 , 2010
Kim Kardashian and Reggie Bush have called it quits, because Reggie couldn’t handle the media blitz that has become Kim’s life, TMZ has confirmed. Sources tell us Reggie was fine with Kim before she blew up and just can’t stand […]